This article is a little late in its production, but it's likely one of the most impactful and important projects the CCFR has done to date. On a cold winter Sunday afternoon, a group of unlikely teammates made history.

The vitriol and mud slinging by folks with opposing views on contentious issues - from BOTH SIDES of this debate - doesn't exactly foster an environment of mutual respect and collaboration. But between the constant and exhausting social media debates, we all began to notice some common ideas between us. How can this be?

What is the cost to this intentional and increasingly wide divide they create for us? Well, I've said it multiple times, the cost is real, and it's in human lives.

We can continue down the path carved out for us, or we can stand up and say we've had enough. 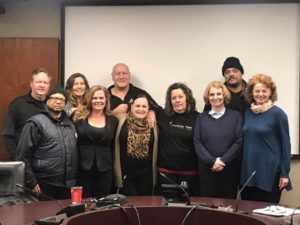 There were 3 moms, Evelyn, Kellie and Alison from Communities for Zero Violence, an action group of mothers who have lost their children to "gun violence", Louie March from the Zero Gun Violence Movement and two reps from the One by One Movement, an organization of "formers" (to use their words). Ex gang leaders and extremists, the very people who dealt out violence and chaos in our streets, now converted, reformed, and committed to working to keep young people from going down that dark, terrible road. Allison De Groot from the CSAAA, the organization that represents Canadian firearm retailers, importers and manufacturers, Emily Brown and Frank Dainty (both CCFR members) from the Ontario Council of Shooters and Tracey Wilson from the CCFR attended as representatives for the firearms community. It was important to have a "pro gun" side to the conversation, as we are often the target of social and mainstream media attacks after a shooting or episode of violence occurs.

Unlikely allies - moms mourning their children who were victims of violence, ex gang members and the gun lobbies. Who would have ever thought this meeting would take place. This was an important first step, with much more work to come. We aren't content to chalk it up to a photo op, there is a very real opportunity to make a tangible change in the safety of our communities. Nobody wants to see people get hurt.

While the details of the meeting and it's discussions will remain internal (for now) out of respect for the participants and a deep need to see the project continue, we wanted Canadians to know this is a chance for us all to participate in this kind of "meeting of the minds".