As the narrative shifts in the coverage of the tragic shooting in Toronto, we see a desperate attempt to maintain a connection to gun control. News outlets across the country are reporting some numbers out of the Toronto Police Services officials, claiming that 50% of crime guns originated with law abiding gun owners and were then sold on the black market to criminals.

Global news reports that before 2012, about 75 per cent of the firearms were trafficked from the United States. By 2017, however, about half originated from domestic sources, putting an end to the idea that most of Canada’s illegal guns come from across the border, Det. Rob Di Danieli of the guns and gangs unit said.

Could that be true? Of course not, here's the actual data for those who think critically;

We keep hearing politicians, media and law enforcement quote that 50% of crime guns were domestically sourced. The truth is the 50% quote is on bottom of page 17 of the ATIP below. It has an important qualifier: "of those that were successfully traced". But the previous page states they successfully traced 229/783 (29%), so only 14.6% of suspected "crime gun" firearms were confirmed domestic. If the police can't determine the origin, they assume it's domestic.

Here's the ATIP obtained by Dennis Young, one of Canada's leading researchers into gun control. Remember, this is the actual data recovered from the RCMP 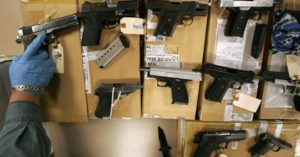