Last summer, while in Ottawa for the CCFR AGM, President Rod Giltaca was joined by Tracey Wilson, Chair of the Board to participate in a documentary piece by Vice Media's Nick Wilson. The premise of the piece was to follow one of the journalists, Manisha Krishnan's journey into becoming a firearm owner. Manisha went through the motions of what it takes to acquire a PAL in Canada and then travelled around to meet with various people in the firearms community to try her hand at different genres of the shooting sports. She tried Cowboy Action Shooting, IPSC, long range etc.

Rod & Tracey had two roles in this piece, the first an interview segment with Parliament Hill as the backdrop where they discussed current laws and regulations and their effect on law abiding gun owners. This was followed up with a trip to the range where Manisha tried a few shots from a .338 Lapua. In the end, she decided Cowboy Action was her favorite.

This piece was rather daring as it veered away from the usual rhetoric and anti-gun sentiment and instead shed a positive light on the firearm community and it's members with a fun, light, enjoyable piece of entertainment. It highlighted how Canadian firearms owners are good, hardworking everyday people with an extraordinary hobby. "How to Buy a gun in Canada; Armed & Reasonable" originally aired December 14, 2016. 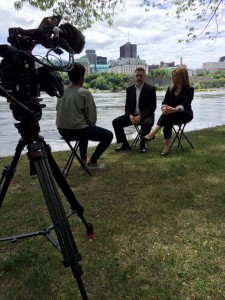