It's almost that time of year again, the CCFR's Annual General Meeting of the Members (AGM). The crew is geared up for a great event in beautiful Gatineau, Quebec (more information to follow), just a quick trip across the bridge from the Nation's capital. With some positions drawing to a finish, we thought we would post nomination information for those either looking to possibly do more, or those who know someone who would be perfect for the job.

The office of Director for the Board of the Canadian Coalition for Firearm Rights is a provincial position. Nominees should have some experience and skill sets to contribute to the overall success of the team.

The following 2-year terms are open for nomination/election this coming June. Elections will be carried out through secure electronic ballot to the membership of the electors province of residence. Other methods of voting are available to those requiring special services.

The nomination form must be filled in and returned to the CCFR office either by mail or via e-mail at the addresses provided on the form no later than May 1, 2018 at 18:00EST. The form must be accompanied by a good quality digital photo and a min. 250 word bio outlining his or her experience, detailing why they think they would be a good candidate and what reasons they have for wanting to serve on the CCFR Board of Directors.

Please ensure your nomination form is complete with all required attachments (bio, pic) to be considered for election.

Candidates and members are encouraged to thoroughly read the By-Laws and the Articles of Incorporation in advance. The results of the election will be announced at the AGM where you may attend in person or tune in via live-stream.

NOMINATION FORM: Nomination Form for Office of Director of the Canadian Coalition for Firearm Rights (1)

Voting information and instructions on how to tune in to the live-stream of the meeting will be sent to all members in good standing at a later date. Tickets to attend in person will be available soon. 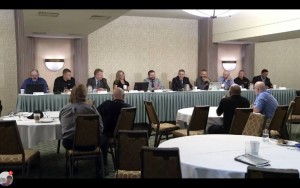