The CPC saw some great successes with the last federal election, gaining 22 seats and the most votes across the country, but due to our electoral system it wasn't enough to win. CPC Leader Andrew Scheer battled through some issues that plagued him and eventually resigned as leader two weeks before Christmas.

What does this mean for the party? A Leadership race, which brings us to the vital discussion we are about to have. There have been multiple people within the party's ranks (and beyond) who have either hinted or stated outright, their intentions to run for leadership of the party. Many recognizable names have been floated from Pierre Poilievre, Michelle Rempel, Rona Ambrose, Peter McKay, Erin O'Toole and even former Quebec premier Jean Charest to mention a few.

Gun owners played an active and important role in the last CPC Leadership race and this one will be no different. In fact, this one may make or break civilian gun ownership in this country.

Jean Charest served as the 29th premier of Quebec, from 2003 to 2012; the deputy prime minister of Canada from June 25, 1993, until November 4, 1993; the leader of the federal Progressive Conservative Party of Canada from 1993 to 1998; and the leader of the Quebec Liberal Party from 1998 to 2012. He became Premier after winning the 2003 election; after he lost the 2012 election he announced that he would be resigning as Quebec Liberal Leader and leaving politics. 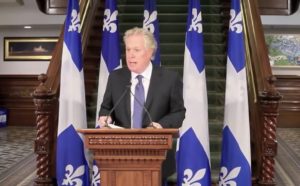 In 2007 amid talk of ending the long gun registry, Charest pledged to increase restrictions on guns in Quebec if the feds scrapped the LGR. He kept that promise and Quebecers are now subject to Law 9 (Loi 9), which creates a significant barrier for licensed sport shooters.

In 2011 Charest, furious at the ending of the wasteful LGR, said Ottawa's plans to destroy the LGR data was "unacceptable" and he would "use all resources available to ensure that doesn't happen". Charest battled and criticized Harper through the entire process.

Charest has consistently supported both anti gun lobby groups PolySeSouvient and the Coalition for Gun Control in their efforts for stricter gun control measures on Canada's most vetted citizens.

Charest is a far left-leaning, Liberal, Quebec politician who hates guns and gun owners - the evidence is right in front of you. Do a simple Google search; Jean Charest gun control, Jean Charest long gun registry, Jean Charest guns … your eyes are not deceiving you - he wants to end your sport and lifestyle.

So … as we enter a leadership race for the only federal party to support legal gun owners, while actually having a "tough on crime" platform to combat violence, it's never been more important for gun owners to understand who Jean Charest is.

He's the elitist, leftist Quebec politician who has the CGC in one pocket and PolySeSouvient in the other - and he wants your guns gone.

It is incumbent on us to ensure he continues to enjoy retirement. There is no place for Charest as leader of the Conservative Party of Canada if you're a gun owner.