After reading yet another “editorial” from your paper, I thought I’d reply to you, rather than just being upset for the continued misinformation you share with your readers.

You open with a statement that Toronto’s board of health joins “a chorus of municipal governments, health professionals and advocacy groups” calling for a national ban on handguns.

Let’s be clear: what you’ve really got is a small group of city councillors practising political theater, an even smaller group of activist doctors, who do not speak for their profession as a whole and anti gun lobby groups. The actual community advocacy groups attending like Zero Gun Violence Movement and Communities for Zero Violence DO NOT SUPPORT CALLS FOR GUN BANS.

I think it’s important for Canadians to understand this is entirely against the will of community outreach groups, law enforcement and any other credible expert on this file.

You go on to cite the number of deaths and shootings in Toronto, but don’t have the honesty or integrity to admit these heinous crimes are carried out by criminals with illegally acquired guns.

You state that Harper somehow made “stockpiling guns” easier, which is both false, and irrelevant since it isn’t legal guns causing the problem. You say “police say many of those guns find their way into criminal hands” .. “many? That’s your data-driven statement? Very few is how it should read. Every single law enforcement agency in the country has been clear that the vast majority of “crime guns” used in Canada flow across the invisible, unprotected 8000km border we share with our friends to the south. But facts don’t matter here do they. And since when do we blame the victims of crime? The last thing any legal gun owner wants is their firearms ending up in the wrong hands. Maybe we should also focus on what kind of sentences are being handed out for break-in with the intent to steal firearms. No, your solution to the inability to prevent our guns from being stolen, is to simply steal them first. What’s the plan? Kicking in the doors of good, hard-working legal gun owners and rounding up their property? Property they’ve owned for decades without issue?

You worry about municipal bans because there are no borders around cities, yet completely ignore that same fact internationally.

You bring in Mayor Tory as a reliable source, yet we all remember the 2008 municipal election where he criticized Chow for this exact same virtue signalling. He knows gun bans don’t affect the criminal element, and I suspect you do too. His mind changes with the blowing of the political winds, a master himself in the art of political theatre.

You end this fact-less diatribe off with the age-old “think of the children” statement from none other than Wendy Cukier, a woman who has made a career out of being a bully and gun-grabbing from legal owners. How many lives could have been saved if not for her constant redirection of focus and resources away from criminals and directly on to legal, law abiding gun owners? How dare she, or you for that matter, insinuate gun owners are somehow responsible for the tragedies we see where people have lost children. Sick and despicable behaviour, even for the likes of Cukier. Gun owners are parents and grandparents too, and we want a safer Canada.

You should be ashamed of yourselves. No wonder Canadians from coast to coast have lost faith in their media sources. Put down the pens, true journalism is dead – you are mere puppets on the stage of anti-gun political theatre.

Tracey is a founding member of the leadership team at the CCFR, an avid hunter and sport shooter who enjoys taking her two daughters and grandson to the range. She is a registered in-house lobbyist, advocate for gun owners, and lobbies for credible work on crime. 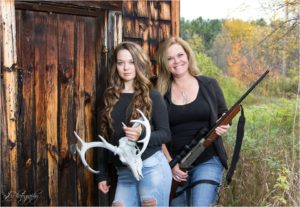