Over the Canada Day long weekend, notorious anti-gun lobby doctor Najma Ahmed penned yet another opinion piece (and got it published), blaming legal gun owners for crimes committed by criminals, and injected herself into the debate once more. Within the narcissistic article she totes herself as "prominent" and once again tries to draw some kind of link between crime and violence and the people not committing it - legal, RCMP vetted gun owners.

The dishonesty oozing from this fluff piece wreaks of self-aggrandizing and her need to be heard, regardless of how misguided and downright dishonest her message is.

Where to even start?

I guess the most logical place would be at the stated end goals - a reduction, if not idealistically an elimination of firearms related injuries and fatalities.

And that's about as close as the two sides, in their current positions, will ever get.

Legal firearms owners absolutely want this. Organizations like the Canadian Coalition for Firearm Rights, have long advocated for the participation of various social programs, whether at the private grassroots level or through some form of public programs to provide the fabric by which to divert at-risk youth from entering into drug and gang cultures where illegal firearms use is a tool of the trade, public education on safe handling of legally owned firearms to prevent accidental injuries, mental health support systems to assist those that do pose a risk to themselves or others, and an effective judicial/corrections system which adequately removes threats to the safety and security of the population at large.

The problems we are seeing are incredibly complex and require complex solutions, with multiple approaches working in concert to mitigate the causes that lead to the manifestations of crime and violence.
This particular group of doctors (thankfully, they don't represent the majority), however, sees it differently.

The first point to draw attention to here is the assertion that they must work with legal gun owners. While I wholeheartedly agree with the sentiment, in practice, their approach has been anything but collaborative. When approached to even discuss bridging the gap between their narrow perspectives and some of the other underlying issues, legal gun owners are accused of racism and misogyny (that playbook is really getting tiresome) and blocked from further conversations that may impede the advancement of their agenda. Their spokesperson is on record as saying they have no interest in dealing with crime but rather on removing the legally acquired property of 2.2 million law-abiding and peaceful gun owners that have done nothing wrong.

The last time I checked, shooting someone was a crime.

The last time I checked, illegal possession of prohibited firearms was a crime.

How causes and determinants of crime can be logically removed from any possible solution is beyond me, and ought to be questioned by any sane and rational person.

To add to the illusion of legitimacy, they trumpet the public health banner under which to march towards some mythical utopian society. Certainly no one would know better about public health than a diverse group of physicians, right? Most people put more blind faith in their medical professionals than possibly any other group. How many of us know the medications we are administered, how they work, and what the contraindications might be? Even though medical malpractice fatalities outnumber firearms related fatalities in orders of magnitude, we continue to give them the deified and omniscient pedestals on which they stand and accept that they know best. In all things.
Generally speaking, they don't.

If the invitation to work together is sincere, we've been waiting, all this time, to get to work. This problem will not go away on its own, but blaming those that in no way contribute to it and sabotaging their efforts to find solutions is certainly not the best path forward. 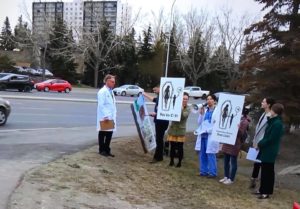 ~scene from the Calgary "day of action" protest organized by Dr. Ahmed