We've seen a number of failed methods of consultation in this matter; the online survey - an unsecured online survey that allowed people from anywhere in the world to input answers, and as many times as they wished. Technology usually implemented to restrict surveys to Canadians only and to one response per applicant were tossed by the wayside so of course the survey results are compromised. We've seen one town hall meeting, with vetted questions submitted to Liberal MPs who cherry picked whose concerns mattered, and whose didn't. 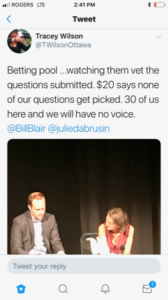 We've seen the "invite only public consultations" (an oxymoron in itself) with just over 250 Canadians in total invited, chosen by the Minister himself. Read more about the consultations

Opposition critics have been hosting town halls across the country, in towns and cities, trying to give gun owners a voice in this ridiculous debate. Conservative MP Stephanie Kusie had been hearing from a lot of constituents in her home riding of Calgary-Midnapore who wanted answers to their questions. Alberta is a gun-owner rich province, with salt of the earth type hunters, farmers and sport shooters all concerned about the future of their sport. She went to Minister Blair on behalf of her constituents and got the Minister to agree to come to Calgary - one of Canada's major cities that was completely over-looked during the scheduled consultations. She had her staff begin compiling lists of attendees only to have the Minister refuse to allow access to the public to have their concerns addressed.

This is the correspondence sent out by Kusie's office on the matter;

We share Stephanie's disappointment and were hoping for a more open and transparent opportunity for all Canadians. Feel free to reach out to the Minister and let him know how you feel about this: bill.blair@parl.gc.ca