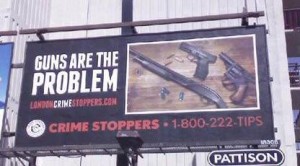 To Whom It May Concern,

On September 8th I came across a picture of two billboards sponsored by the London-Elgin-Middlesex Crime Stoppers stating simply "Guns are the problem".  As a gun owner and an educator I am at a loss as to what your group is trying to accomplish.

I'll have to admit that personally I find the message ignorant (at the least) but not shocking.  I would think that your intent was to direct toward criminal behavior, though that's not what it says.  I'd like to help your group by providing some basic facts and guidance.

There are roughly 2.2 million licensed gun owners in Canada. These people met safety requirements, were subjected to detailed background checks, provided references, answered incredibly personal questions, and are subjected to a criminal record check every day for as long as they hold a firearm license.  They use firearms safely and legally every day and have since the birth of Canada.  Canada is awash in guns.  Based on estimates, we speculate that there are 21 million guns in Canada, yet Statistics Canada tell us there are only 150 firearm related homicides in Canada every year.  If guns are the problem, then how can this be?

I would imagine if you had the opportunity to revise your message you'd want to find a way to express that criminal behavior is truly the problem.  A broken justice system, poverty, unemployment, declining moral values, drugs, alcohol and diminishing hope for the future might more accurately describe the problem.  In certain areas in Canada, crime is committed disproportionally by immigrants. Would you feel it acceptable as a registered charity to sponsor a billboard stating "Immigrants are the problem"?  Of course not.  Guns, are by no means the problem in criminal activity anymore than knives are the problem in stabbings.

In my time as President of the CCFR, I have encountered countless fallacious claims and arguments applied to the role of firearms in free societies and their relationship or lack thereof with criminal activity.  From homicide to gang activity to domestic violence, I have studied and read for thousands of hours to accumulate the level of knowledge required to comment on these matters.  The CCFR was created to educate, support, and consult with media, government, and non-gun owning citizens.  Feel free to reach out to us anytime if you have questions or if we can be of help in any way.

In any case, on behalf of millions of the most trusted Canadians in our society, please be more responsible with your messaging.