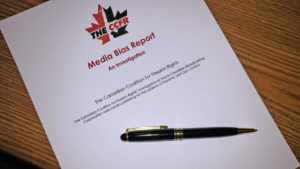 The popular consensus among firearm owners is that the Canadian media has on the whole a bias against firearm rights and for gun control measures.

The Canadian Coalition for Firearm Rights has commissioned this report to identify the qualities and scope of this bias. The study isolated the Canadian Broadcasting Corporation and completed an analysis of online media sources from cbc.ca over the 2018 year.

We believe that this report demonstrates a clear bias in favour of gun control and fails to sufficiently account for perspectives of 2.2 million firearm owners across Canada. The CBC harbours a strong bias against the legal ownership of firearms and holds a poorly supported bias toward gun control.
This report also provides evidence that better education of journalists can lead to more balanced coverage of the issue.

The conclusion of this report also provides a road-map to future research including a more comprehensive look at all the media organizations which service the needs of Canadians.

We hope through this work we can help the CBC and other news media to fulfill their responsibility for fairness to Canadians, including those who are legal firearm owners.