MP Bob Zimmer recently sent the following letter to Minister Blair after restricted firearms owners across the country received letters from the RCMP. It appears proper protocols for issuing revocations to registration certificates was not followed ... so what are these letters and what do they mean? Does the Minister even know? Does anyone know?

July 23, 2020
Honourable Bill Blair
Minister of Public Safety and Emergency Preparedness
House of Commons
Ottawa, ON K1A 0A6
Dear Minister Blair,
I am seeking clarification from your office regarding letters the RCMP has recently sent to firearms owners nullifying certain restricted firearms registration certificates due to the firearms ban which was brought in by your government through Order in Council in May.
According to subsection 72(1) of the Firearms Act, “…if a chief firearms officer decides to refuse to issue or to revoke a licence or authorization to transport or the Registrar decides to refuse to issue or to revoke a registration certificate, authorization to export or authorization to import, the chief firearms officer or Registrar shall give notice of the decision in the prescribed form to the applicant for or holder of the licence, registration certificate or authorization.” In addition, subsection 72(2) states that “A notice given under subsection (1) must include reasons for the decision disclosing the nature of the information relied on for the decision and must be accompanied by a copy of sections 74 to 81.” The letters recently received by firearms owners did not follow this format and did not include a copy of sections 74 to 81.
Not only that but rather than being personally delivered, couriered, transmitted by electronic means, or sent by registered mail these letters were sent via regular mail. This seems to go against the Notice of Refusal or Revocation section of the Firearms Registration Certificates Regulations. These letters were also sent unsigned so there is no clear indication as to whether the person who issued the letter is the Registrar.
It is of the opinion of some legal experts that due to the fact that these letters failed to comply with above requirements they should not be considered revocation letters. Therefore, I am seeking clarification as to whether the RCMP considers these to be revocation letters, and if not, what was the purpose of sending a letter to firearms owners that could be confused as a revocation letter.
If these are revocations letters, by what means can Canadians exercise their legal right to a section 74 hearing and why is the section 74 process not spelled out as required by law?
I am also seeking answers to the following questions:
1)   Why were these letters sent eighty one days after the firearms were banned on May 1st?
2)   How many of these letters were sent out?
3)   Was this same letter sent to the owners of the non-restricted firearms that were made prohibited? How will these owners be ascertained?
4)   How many owners of the formerly non-restricted firearms are there?
Thank you in advance for your urgent attention to this matter.
Sincerely,
Bob Zimmer
Member of Parliament
Prince George-Peace River-Northern Rockies 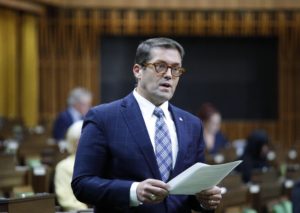 We'll all be waiting with baited breath for the Minister's response .... 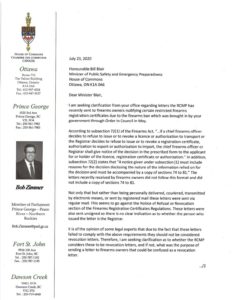 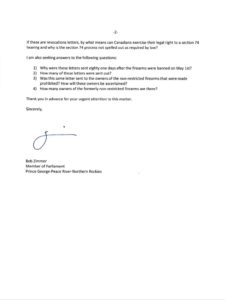 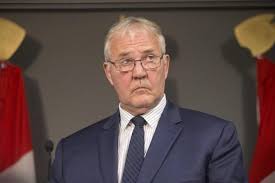